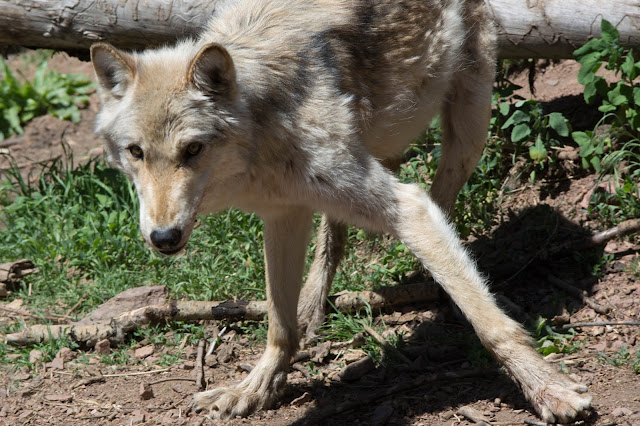 When we think of Canon City and Pueblo, uranium, arsenic, and lead are not the first things to come to mind, but they should not be the last things either.
The Cotter Mill just south of Canon City began processing Uranium for nuclear weapons and fuel in 1958. For twenty years the Cotter Mill was releasing radioactive waste into unlined ponds on their grounds. In 1982 Cotter began using lined ponds until the mill shut down all operations in 2011. In 1984, testing of some of the wells in Canon City was performed by government officials and it was discovered that there was contamination of the water, leading the government to declare it a Superfund site. Cleanup for the Superfund site began after the study in 1984 and continues through today. The Superfund includes the 2,600 acre area which includes the 640 acre mill and the nearby Lincoln Park neighborhood.  There is concern by some residents of Pueblo, like Pueblo County Commissioner Buffie McFayden that contamination from Cotter has reached Pueblo. McFayden was recently quoted by KOAA saying, “I do believe it's time for Pueblo to get involved and work with the citizens of Fremont County to not only demand a remediation plan that's realistic to cleanup the site, but also to demand testing along the Arkansas in the sediment and in Pueblo Reservoir.” While there is not a definitive answer as to how much contamination there is or isn’t in the reservoir it is feasible to believe there could be some.
Click the link for updated clean-up information: Info

Just over forty miles downstream from the Cotter Mill in Pueblo sits the old Eiler’s Smelter another Superfund site. The Eiler’s Mill was known by several names since it began operating in 1883. The smelters were used to smelt extracted silver-lead from the Madonna Mine in Monarch.  The area of the old smelting plant and the Bessemer and Eiler’s neighborhoods were declared a Superfund site after an inspection of the Sante Fe Bridge Culvert in the 1990’s revealed a slag pile. Slag is by-product of the smelting process, which contains both arsenic and lead. When travelling south on Santa Fe Avenue shortly after crossing the bridge part of the 700,000 sqaure-foot slag pile is still visible. The Eiler’s Smelter (under another name at the time) closed in 1908, and soon thereafter the dismantling of the smelter began. In 1924, bricks from the smoke stack were used to build the St. Mary school which is still standing today. People in the Eiler’s and Bessemer neighborhoods are being encouraged to sign up with the EPA to have their homes and property tested for lead and arsenic poisoning.
Click the link for a map of the Superfund site: MAP
Click the link for updated clean-up information: Info

A call came across the radio stating there were two dogs blocking traffic on Thatcher Ave and assistance from animal control was needed. Colorado State Trooper, Steve Ortiz, was on scene and 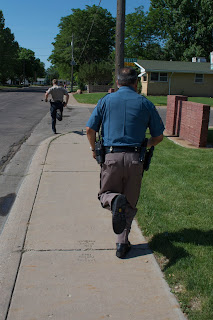 ushered the dogs off the road and onto the golf course. Shortly there after  Colorado Department of Wildlife Park Ranger, Chris Hand, arrived to assist in the wrangling of the dogs until animal control arrived. The dogs on the other hand decided it was time to take a walk and wandered off the golf course and into a residential neighborhood off of Linda Vista causing both officers to give chase. The dogs led the officers down Linda Vista to Airlane. It wasn't until the corner of Airlane and Rice  that the officers had their first shot at capturing at least one of the dogs. Trooper Ortiz was able to get one of the two dogs away from the other and was close to slipping the capture noose around the dogs head but was unable to do so. After chasing the dogs down several more streets, Trooper Ortiz and Park Ranger Hand relinquished the chase to animal control, who was able to continue chasing the dogs in their vehicle. Eventually animal control was able to capture the white dog but the brown one is still on the loose. 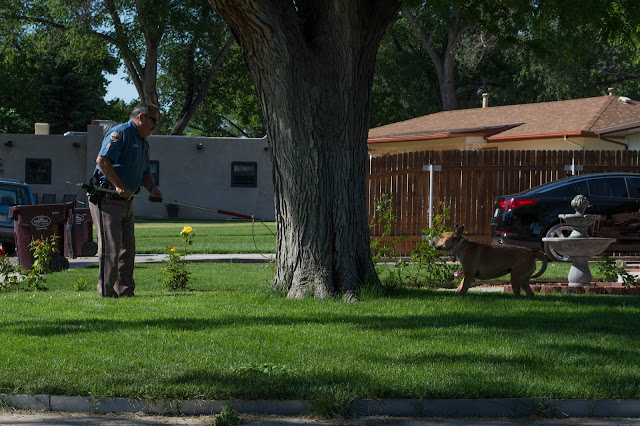 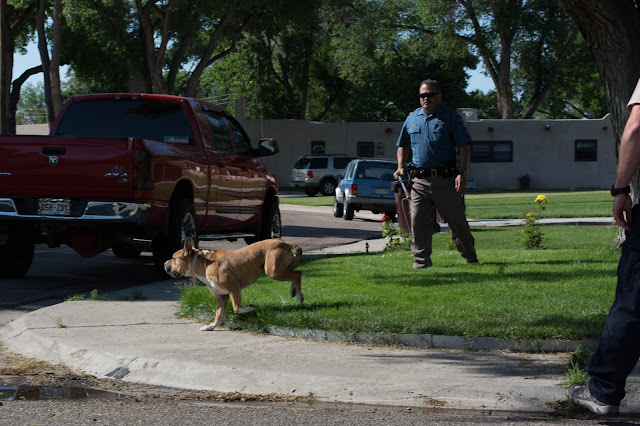 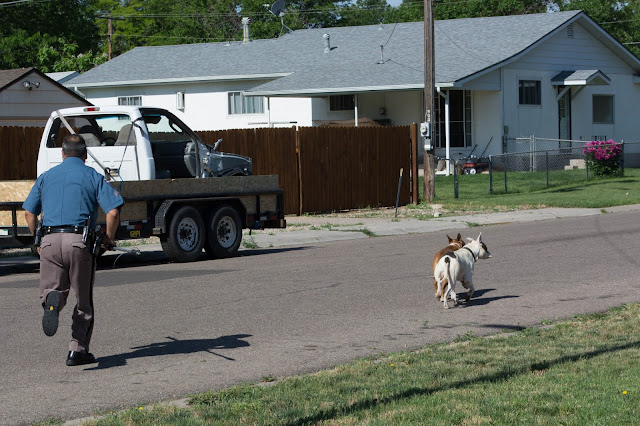 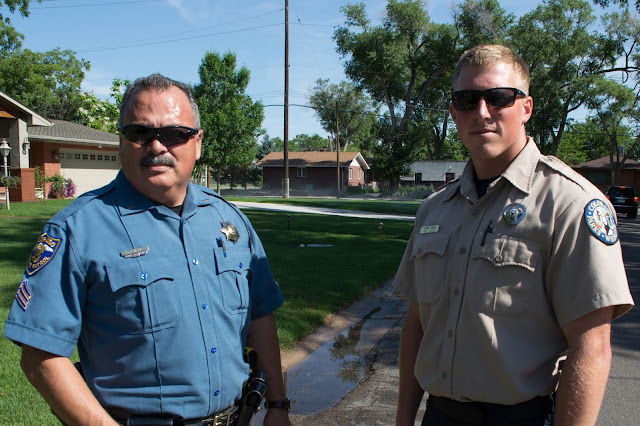