Healthcare reform has been a “hot-button” issue on Capitol Hill and communities across the nation since the introduction of Obama Care in 2009. After the implementation of Obama Care, people with preexisting conditions have been able to obtain health insurance without increased premiums much like those without preexisting conditions, increasing the number of people with health insurance by over 20 million. President Obama increased Medicaid for people that teeter on the poverty line or live below it, which also drove the numbers of uninsured to get insurance.

During the presidential campaign last year candidate Trump vowed for healthcare reform by means of repealing and replacing Obama Care. The new Trump Care bill that is being put before members of the Senate would include cutting funding to the expanded Medicaid, sending that money to the states in the form of grants which would cause people living at or under the poverty level to lose their coverage. Another major point of Trump Care would be for people with designated preexisting conditions to be denied coverage or pay higher premiums than those without.

According to citydata.com in 2015, 31.8% of Pueblo residents live under the poverty line. Poor disabled men in Pueblo came in 34.7% and poor disabled women came in at 33.2%. This is the most likely part of the Pueblo community to be at risk of loosing their health coverage altogether or would have to pay high premiums for preexisting conditions under the proposed healthcare reform.

On Friday, July 14, 2017 members of Pueblo Indivisible, a faction of the Colorado Accountability Coalition, held a demonstration outside of Senator Cory Gardner’s office in hopes of swaying him to vote against Trumpcare. The group brought medical equipment marked with price tags to show Senator Gardner’s people the cost of these items.
Members of the group took turns holding signs and carrying the items up the fourth floor to Senator Gardner’s office. The group wanted to bring awareness to the community and to Senator Gardner’s people the costs related to medical items. If the health care reform is passed, and 22 million people lose their health care coverage they will have to foot the bill for theses items out-of-pocket, causing a heavier financial burden for people already living at or below the poverty level. 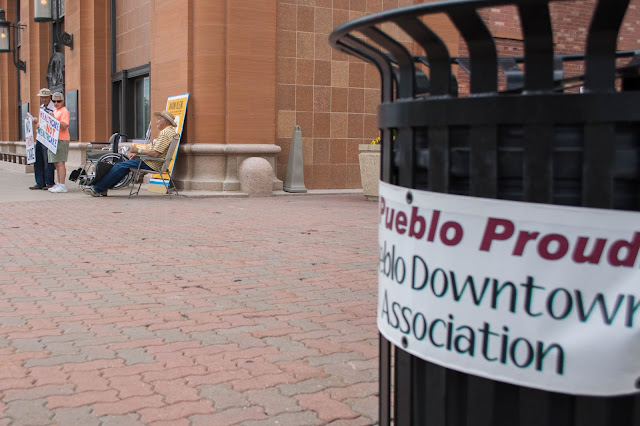